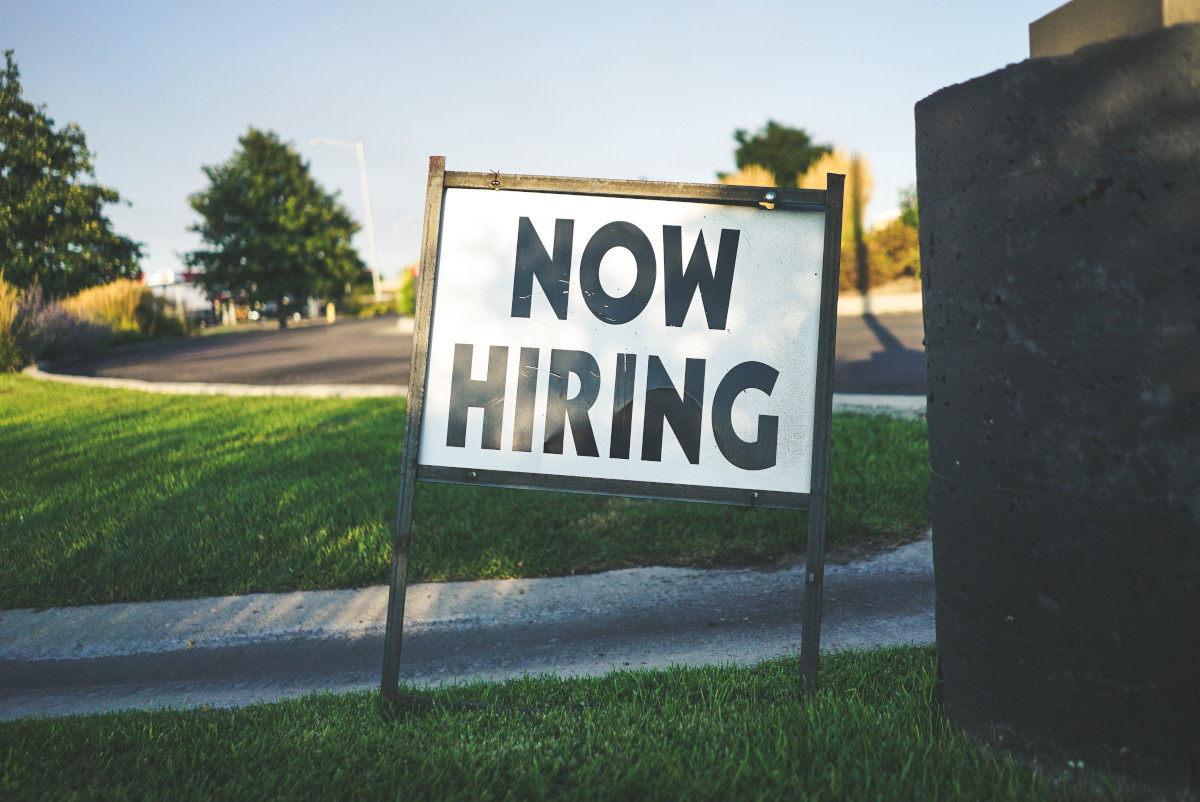 As a software engineer looking at software engineering job descriptions I am frequently amazed at how vague and confusing some of them are. It's almost as if they are written by someone who has never been an engineer.

When I am looking at a job I want to know these basics first:

Often people don't advertise pay. Yeah it's annoying but I get that reasoning from a business perspective. If they don't say I'm just going to look at Glassdoor so I don't waste my time.

Once I know those things and they pass my filter, I want to know these things:

That's pretty much it, yet many job descriptions fail to even deliver on these absolute basics. So for fun I went around screenshotting a ton of job descriptions to see if they have enough information to get me interested.

By the way these are all publicly available on the internet and none of this information is secret. I'm not going to censor any information but I'm also not going to be overly critical so I don't catch any flak. I'll just say if it's a good enough job description and if I would apply for it or not.

We'll start of with on from Apple: 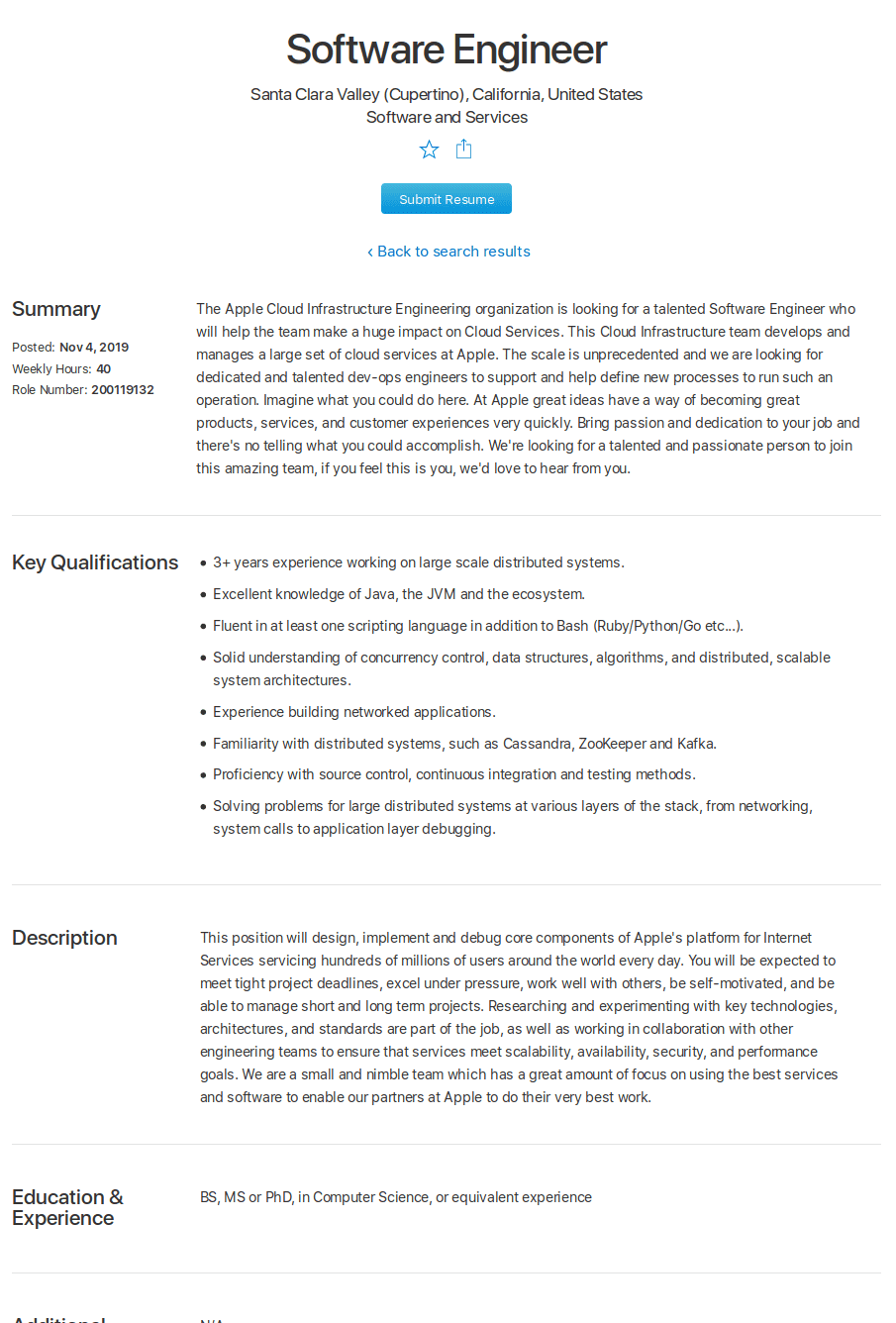 It's good. They don't explain the tech stack but I can figure out it's a Java job building web services. 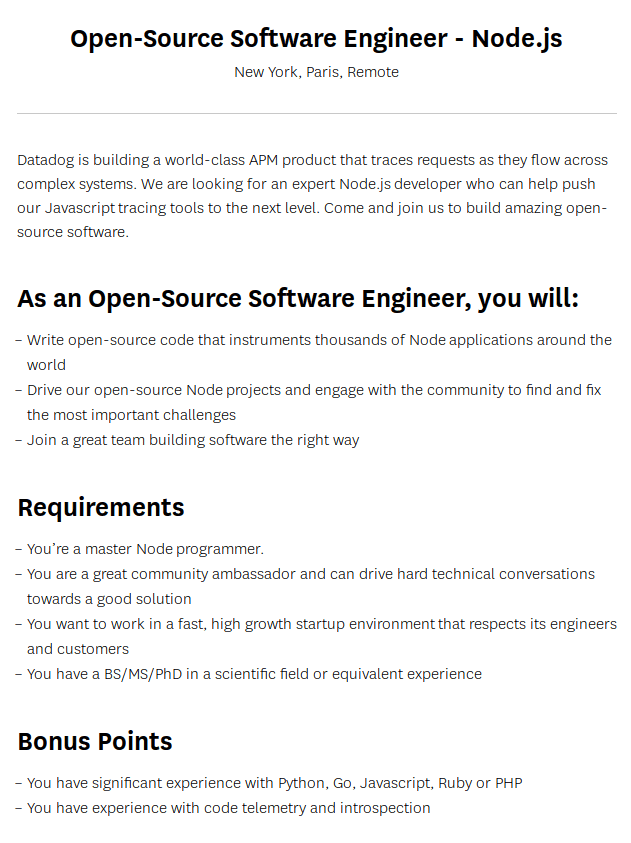 It's OK, but there is very little information about what they want other than somebody that is good at Node.js, though I do kind-of like how brief it is. They did explain they needed a node dev to work on "tracing tools". I might apply for this.

Next is a company called Hustle that I found on a Hacker News "Who's Hiring" thread. 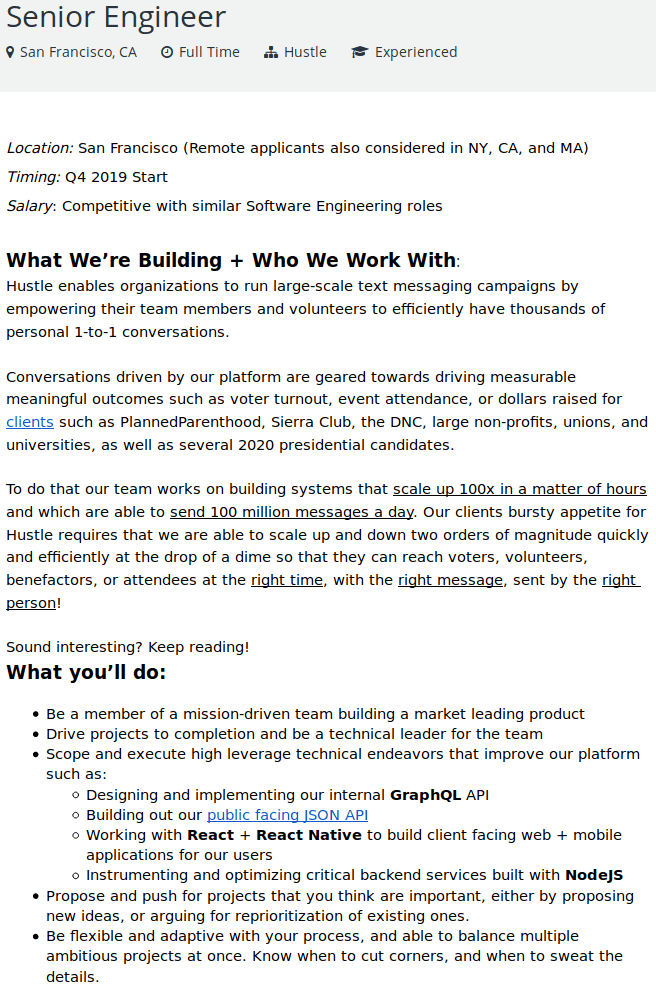 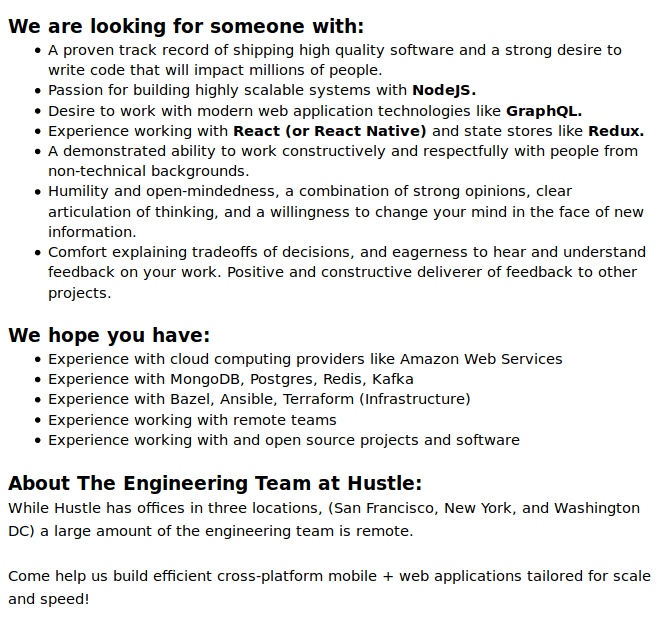 This is fairly clear: they are looking for a Node developer to help write some APIs. I'd say it's good and I would apply for it.

To me this was long and confusing. I have no indication of what they do or what tech they are using. Is it PHP? They don't say. I can't tell if this is a manager or developer role. To me this was not something I would apply for because I don't really understand what they want.

Next, here is a job description from Target. 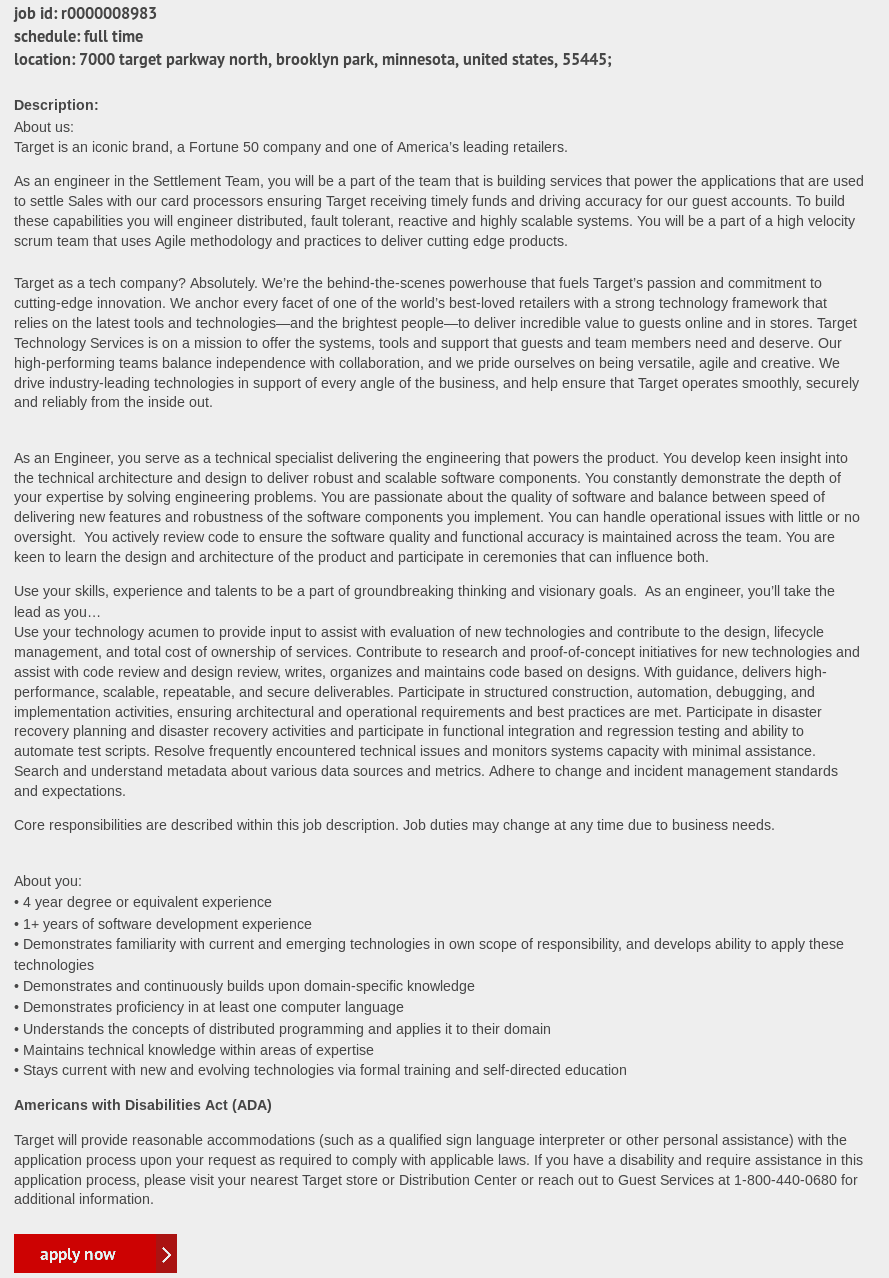 This one has no information about the tech stack, but at least they do describe the project. Maybe they want me to write Cobol? Who knows. Interestingly they put in a line that would scare me away from applying immediately: "Job duties may change at any time due to business needs". I would not apply to this job, there is too little relevant information.

This is from a company called Alto. 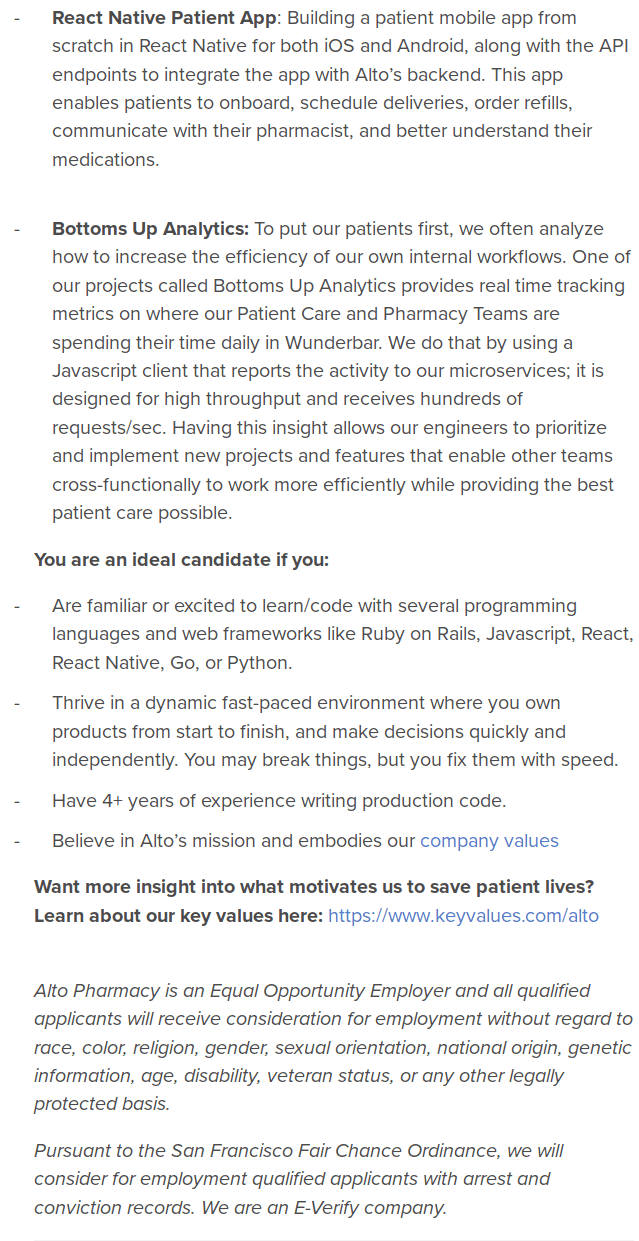 I think there were some cool aspects to this JD (I liked the "Within your 1st month" part), but I thought the tech part was overly vague. I probably wouldn't apply because I don't understand what tech stack they are using and I don't want to end up interviewing for a Ruby job. They gave me example projects but didn't really tell me what project they wanted somebody for.

Last I'll do a company called Big Know, I took this from a local job board called Tech.mn. 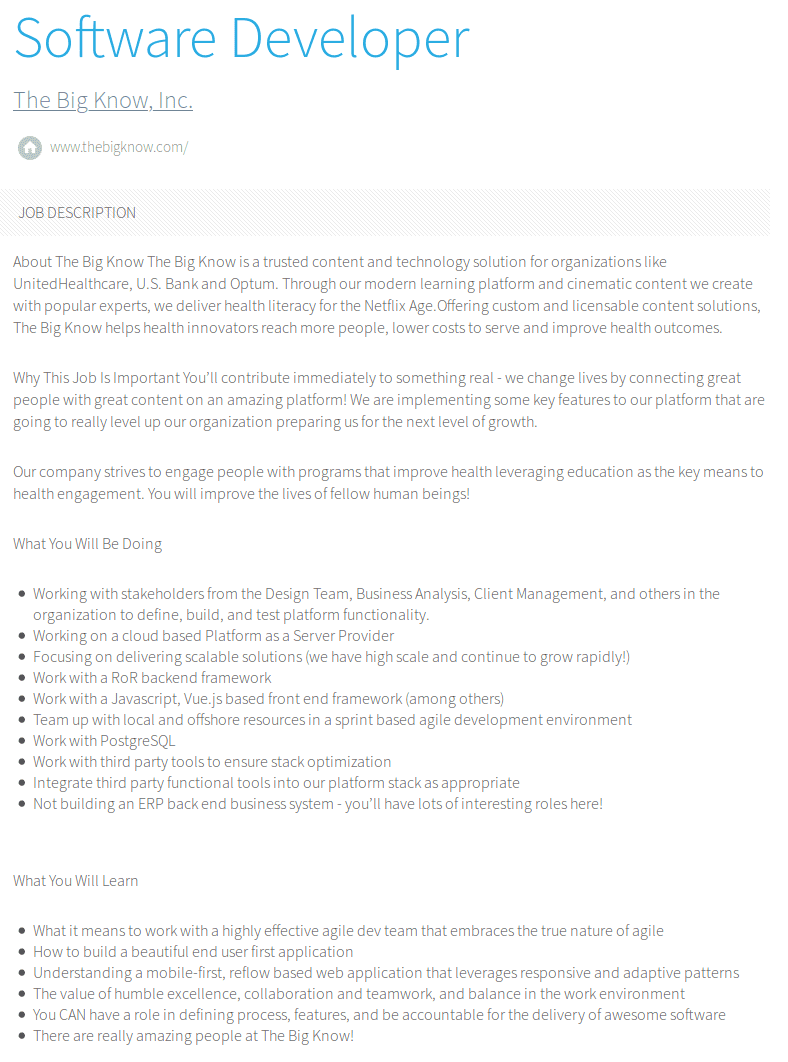 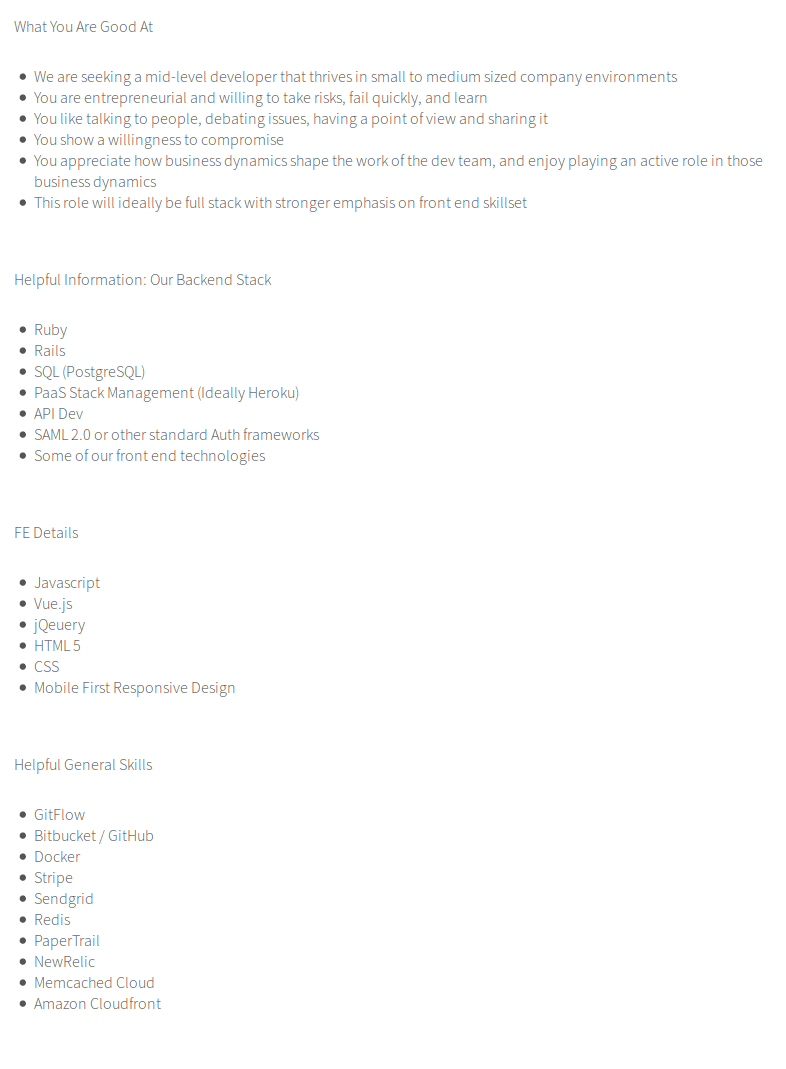 I understand exactly what they do, who they want, what the tech stack is, and what the project is. If I was a Ruby developer and looking for this kind of thing it would be easy to understand what they want and apply.

As you can see, the job descriptions are all over the map. Some fail to even explain basic information for engineering roles, such as the technology being used.

Others go above and beyond and have interesting additional information that catches my eye. Some of the job descriptions spend a lot of time pitching the company to me, which I honestly don't really care that much about. I'm looking for a job, not an investment.

I think if you at least cover these key points you have a decent shot at attracting attention from the people you want: