Java Vs Microsoft .NET for recruiters 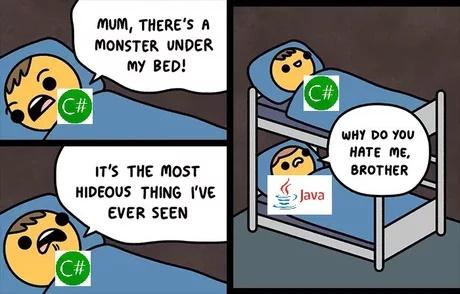 Java and C#.NET are the dominant enterprise backend languages in many of the largest companies around the world. They are used to build desktop applications, web servers, API servers, and more.

Java developers frequently get approached about doing work in C#.NET, which if you know anything about these two technologies does not make any sense (because they are different in a myriad of ways, which we'll go over).

Actually, it's worth mentioning here that mis-targeting job opportunities is the #1 reason developers ignore recruiter messages in general based on the last survey I did.

I'm going to lay out here why and how Java and .NET are different, and why generally speaking backend developers will stick to one type of tech stack and not often cross over.

Microsoft is the company behind the .NET platform. Java is owned by Oracle, but was originally developed by Sun Microsystems and had a strong open source background.

Definitions you should understand

*By the way these are all in the Job Description Keyword Tool.

Below I have a table showing how tech stacks might look to make this a bit clearer.

You can think of Java and .NET both as foundations of backend tech stacks. But, what is a "Tech Stack"? A "stack" is a set of technologies that are frequently used together.

For example, here is a breakdown of a common Java application stack vs a common C#.NET application:

People tend to Specialize in one or the other

Notice something in that table of tech stacks? Not a single one of these technologies overlapped. Programming is not just about writing code, to do anything substantial it requires you to understand databases, servers, and platforms you will integrate your software into.

Being a backend developer frequently means that you need to write the server side application code, build the database structure, and manage application deployments.

Because these collections of technology are usually quite different in Java Vs .NET shops, and there are so many pieces to learn, you usually see people specialize in one or the other but rarely both.

Open source software is a philosophy of sharing the source code of software projects, I go into it in more detail here but generally speaking the Java programming language and ecosystem has deep roots in open source and .NET platform does not.

For example, the source code of the language Java itself is available via the OpenJDK project and has been for decades.

Although C#.NET and ASP.NET are now open source, they did not start out that way.

Culturally, this open source Vs closed source was traditianally a huge difference between the platforms. Many developers are philosophically opposed to working with anything closed source.

Despite the fact the source code is available and C# and ASP.NET are open source there are still many licensing fees associated with developing on the .NET platform. When working on a Java / Linux stack you can avoid most of these licensing fees.

Another big task backend developers are usually responsible for is production support, which entails making sure that if a live software application crashes, it is fixed and returned to service.

Managing a linux server and troubleshooting issues is a very different experience from a Microsoft IIS server, and this alone is a major reason why people specialize. Production support can often entail late nights and working weekends to fix issues in applications that real users are trying to use 😨.

Because of these huge differences in operating systems and deep knowledge needed for troubleshooting, it makes sense to really know one server platform well. Most developers and DevOps engineers just know one or the other (IIS or Linux), not both.

Generally speaking it is more expensive to run Microsoft stacks because there are more licenses to pay for. You have to license MS SQL Server, and Windows Server which means paying Microsoft for the yearly license, and additionally you probably will pay for support.

With Java you have another option though: you can run OpenJDK for free, you can run Debian linux servers for free (for example), and you can run PostgreSQL or MariaDB (a fork of MySQL) completely for free. The only thing you will pay for is hosting costs. Because of this option Java is a lot more attractive to many companies.

So to summarize, there is a big difference between the Microsoft .NET platform and Java based tech stacks at every single layer of technology used.

And to be clear, often this is not a purposeful choice. Got your first job out of college doing ASP.NET? You probably end up continuing to do that OR you permanently switch to something else at some point.

Generally speaking backend developers are not doing both stacks or switching back and forth frequently because of the amount of work that goes into learning and keeping up with one platform or the other. I would question someone's skill at either if they claim to be expert in both.

The takeaway is that if you are trying to fill a .NET backend position, it is generally going to be ineffective to approach developers with mostly Java experience, and vice versa. People tend to specialize!