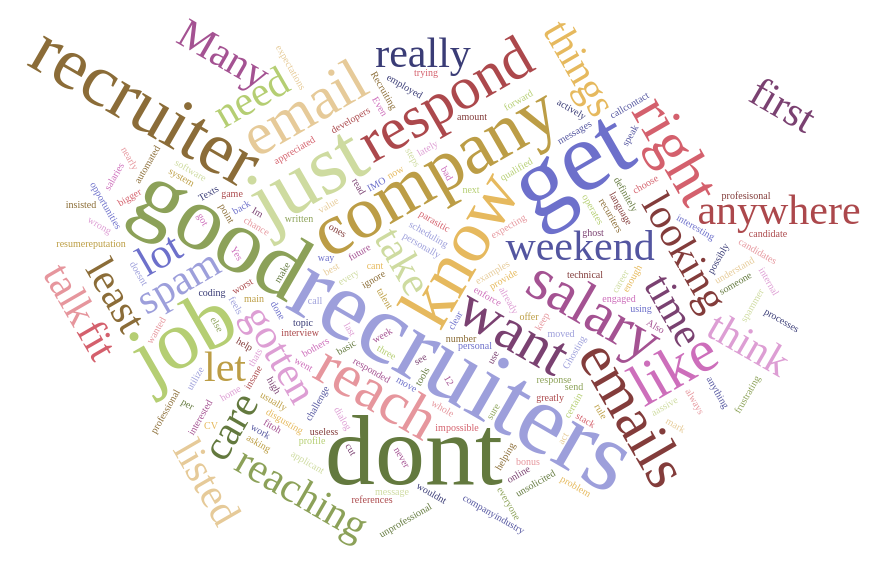 Here are the previous years results:

Similar to last year, developers are likely to reply if you include enough information to conclude that the role is a match for them.

Also similar to last year, except I threw in a question about remote work.

Of course here we can see that mis-targeting is still high on the list. Don't ask Dev-Ops engineers to do CSS!

This was not surprising to me, as the job market has tightened this last year and the amount of messages I get that are essentially outright spam with little effort has increased geometrically. Given that obviously recruiters are busier, this means people are going to have more bad experiences even when they do reply.

Thought about it for a sec and I ignore them for basically all of those reasons. But I especially find it annoying when they don't mention comp but instead mention all the stupid benefits no one cares about like foosball tables and free soft drinks at their physical locations. They'll list things that total like $100/mo worth of value instead of giving concrete compensation details or role descriptions.

Another developer using the monicker "CryptoDiesel" added this and made a good point about internal vs external recruiters. As an external recruiter you have to work harder to get attention from more senior engineers:

Could be just me but recruiters that work for a company compared to people with random requirements gets more responses from me. I'll talk to Google or Facebook if they reach out direct but if someone says they have a job at Google and it's from Randstad instant ignore because normally they are crummy and the job is going to suck.

Here is a general comment from a senior engineer that I think reflects the aggressiveness of hiring in 2021 for engineers:

It's gotten really bad lately. Texts on the weekend, messages to my personal email and a lot are using scheduling tools that send my three emails until I respond. I have passive ignore rule now where it mark them all as spam.

This was NOT the only comment I got about ghosting. I know recruiters are busy but I think taking an authentic (not superficial and fake) personal approach and framing your first contact goes a great deal toward combating this attitude:

I think it's disgusting how many act like they want to help you. They talk such a good game and when the company doesn't choose you by chance they ghost you and you never here from them again. At least let me know what went wrong or possibly speak to me about other opportunities. Because of this I usually don't utilize recruiters and have always gotten a job on my own.

Here is another longer response I thought was worth including:

I think the main problem with recruiters is they don't "understand" the language of developers, they reach out for stack candidates don't have listed anywhere online. Also, recruiters don't have to enforce internal processes just on a first call/contact. IMO, a first call is just to make sure the candidate and the company are good fit and to talk about the next steps. Once a recruiter insisted on asking me for a CV, salary expectations, professional references... when I was trying to say I just wanted to see if we were good fit.... oh salaries, that's a whole topic on its own

Well, unsurprisingly since hiring is extremely competitive in the current environment engineers are reporting more negative feelings toward the hiring process and recruiters. I even had a much harder time than usual to get people to even fill out this survey!

The volume of messages engineers are getting now has increased markedly over just the past year. It's no wonder the quality is going down, but I think this just demonstrates it's more important than ever to be able to craft messaging that authentically stands out from the competition.