Last month I surveyed 24 Tech Recruiters in preparation to build ITeach Recruiters (which will be an online video course, and no, it's not finished yet). A big part of even deciding to go ahead and build the site and course was reading the responses in this survey and seeing that I could help solve a real problem.

Most of the respondents here were recruiters who had previously contacted me on LinkedIn, so thank you if you are reading this now.

1. How long have you been working as a recruiter?

I asked this just to establish an understanding of experience. I'm really happy that most of the people I surveyed have at least 2 years of experience, I think that will give a much better picture of the industry.

2. What is your typical response rate?

I asked this question because I also asked this in my survey of developers, and I did find a slight difference. But I suspect that the reason is that recruiters who took this survey have better response rates overall since I don't think I asked any recruiters to do this survey who were just plain blasting out mass emails.

3. Where do you learn about technology?

Note: this question was a short answer, not a radio option type question. 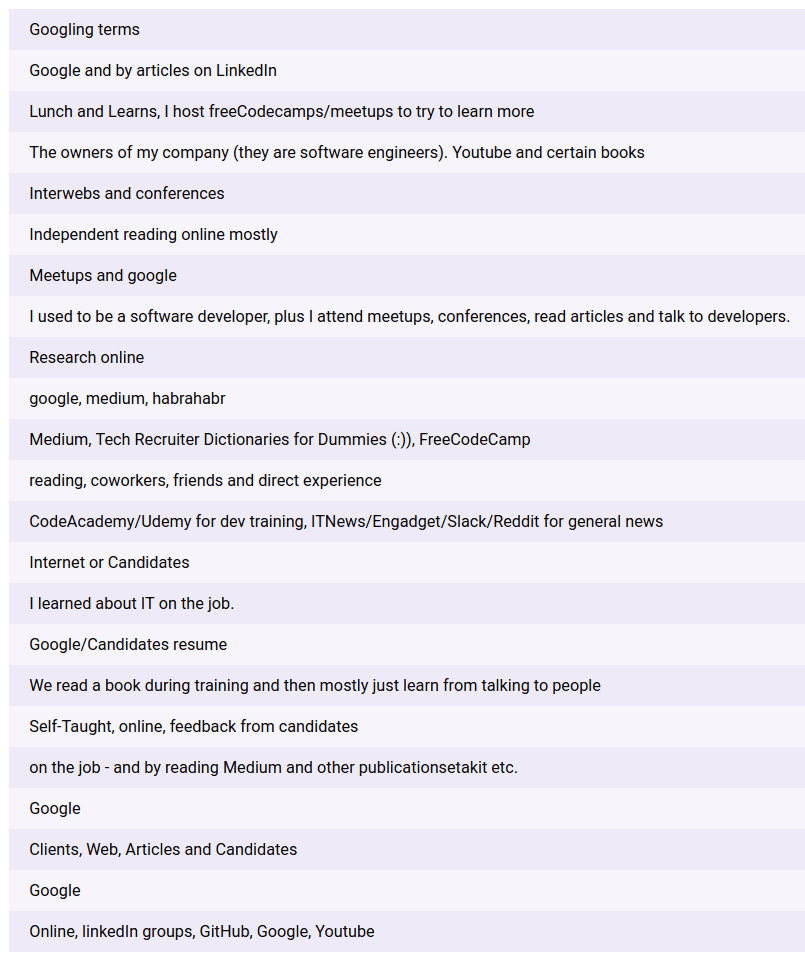 This was something I suspected but I was surprised to have it confirmed. Employers are not providing training and recruiters, as employees, are just expected to google things and figure it out. This is surprising because I would expect employers would see a benefit in even doing just minimal training on technical topics. Well, I hope to fill this gap.

Some of these are interesting - but I see very few responses indicating people are doing structured courses. A couple of people said Udemy and FreeCodeCamp, but in general I would expect it would be hard to get a full understanding of things from reading news articles and attending meetups which are typically structured as a surface level dive into a random very specific technology or framework (basically whatever somebody decides to talk about that month).

As for responses like "candidates resume", I'm not sure that makes any sense to me. I think you might become aware of a technology from reading a resume, but I don't know how reliable that is for understanding what the purpose of a given technology is and where it fits in to the bigger picture.

4. How often do you do training? 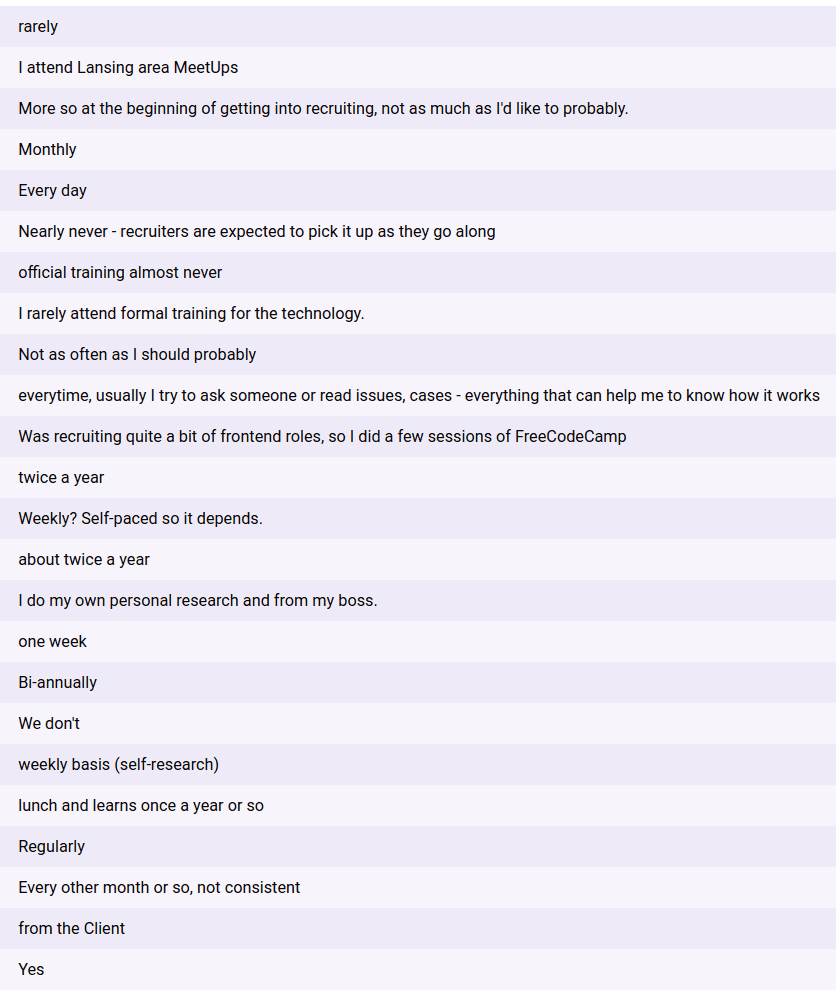 Summary: most people do very little.

Again, something I suspected, but was surprised to see confirmed. Technology changes extremely fast and in my opinion, especially in web development, you have to work to actively to keep up with new things coming out.

I think that doing more training, more often, will be hugely beneficial to recruiters. Responses were all over the map, but in general a lot of people are doing very little guided or formal training here.

Also you can see some people are actively doing training often. I think as a follow up in a later survey, I will ask about what training people are doing more specifically, and what they are finding to be most useful.

Original title of this question: Would you be interested in doing extra training about technology topics if it could improve your response rates?

Summary: yes, and even more if the employer pays.

This was extremely validating to see: not a single "No"! The vast majority of recruiters were interested in doing more training. So at least my potential customer base here is open to the idea of more training!

6. How much would you be willing to pay for a course?

Full title of this question on the survey: How much would you be willing to pay for a 10-20 hour course that would cover tech topics, and research about how engineers respond to recruiters?

Summary: most people would pay something, many people want to see a sample first. That is fair and great feedback!

I'm happy that 15% of people were very honest and said they would never pay anything for a course. I want to put out a lot of free content (like this blog) but I also have to earn a living so I need to really work to understand what people who would actually pay for a course want for their money.

I got a lot of people saying $25, which I think is reasonable if I can get enough paying customers. That is a big question I am trying to solve right now. I don't live a very extravagant lifestyle but even earning 50k a year doing video courses (which is a whole hell of a lot less than I was making as a developer) might be hard.

So maybe it will end up being more expensive, or maybe there is some premium feature like a private slack group. Could I eventually move to a subscription model and continually put out content? Not sure. If you have ideas let me know.

7. What are your frustrations about your work? 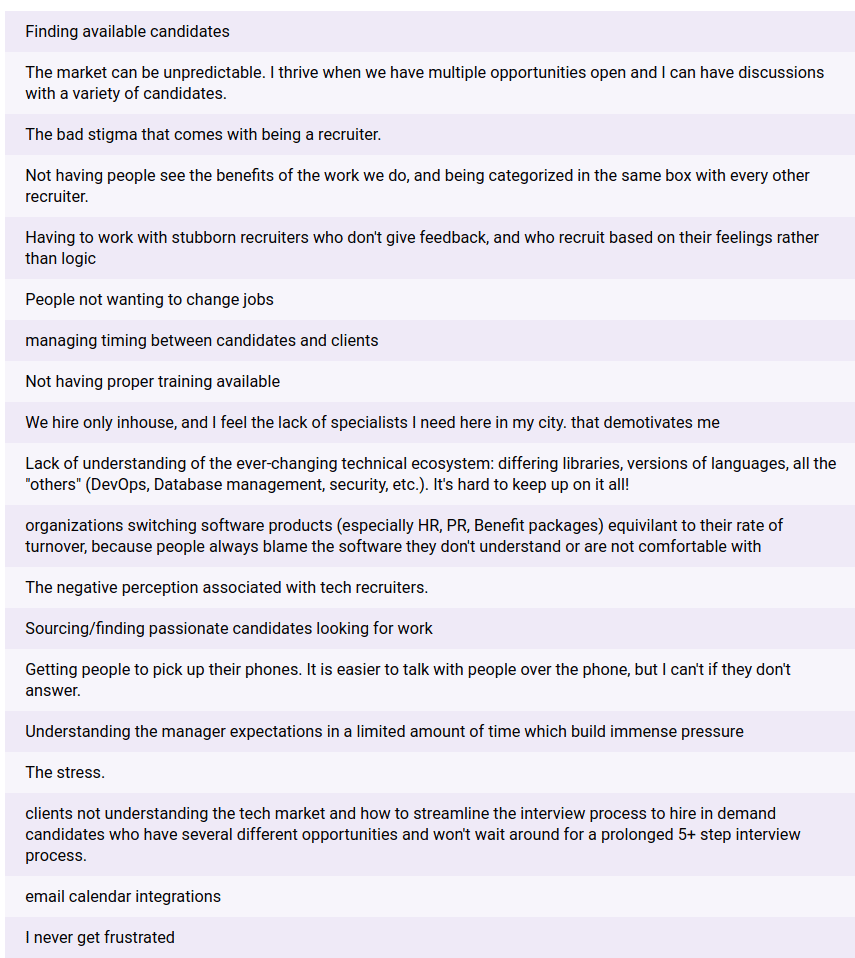 Summary: many people mention stigma and bad association with other recruiters.

I wanted to ask this because if I can just ask directly "what sucks" and I can solve some of those problems maybe that is valuable. Some of this stuff I can directly help with e.g. "Not having proper training available", which is super validating and tells me I could maybe sell this course to recruiting firms directly.

I also think the responses about "sourcing" are things I can help with by explaining maybe where developers hang out online and why they are hanging out there. Every response here is useful and informs topics I can put into the course content.

8. What do you enjoy about your work? 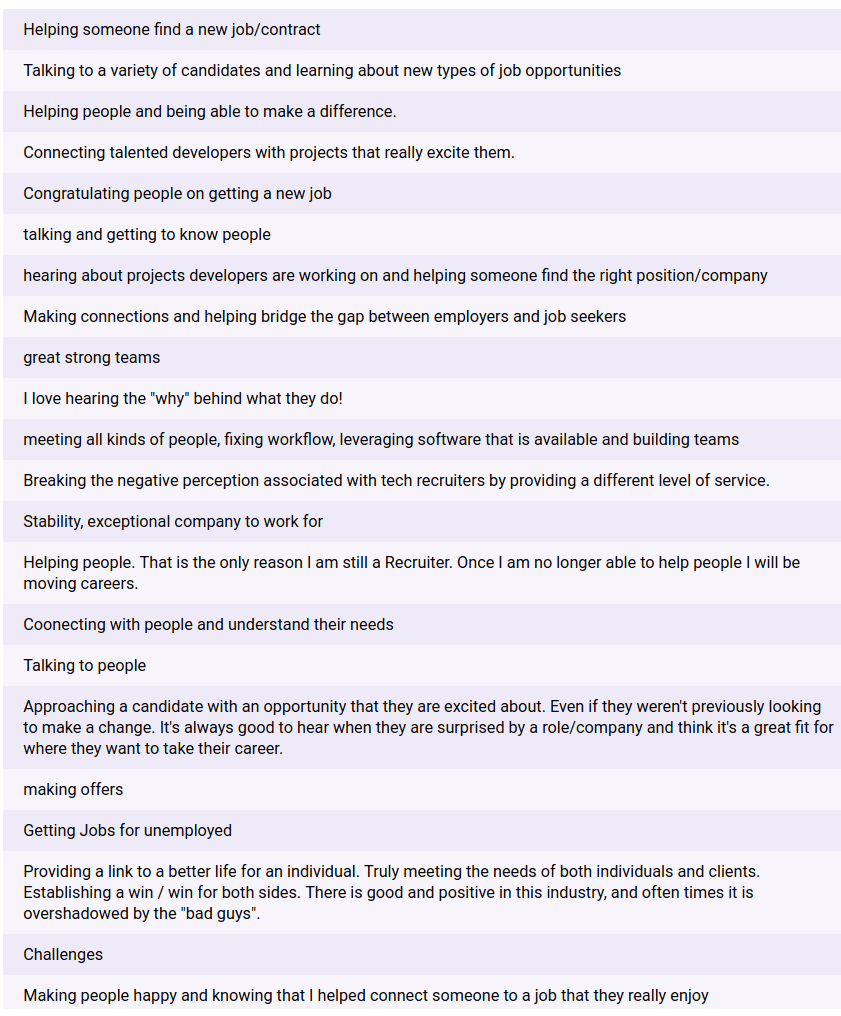 Just trying to find out why people are working as recruiters at all and what motivates them. Seems that most recruiters genuinely enjoy connecting with people and successfully getting them jobs, which is pretty cool.

9. What do you think would make your job easier? 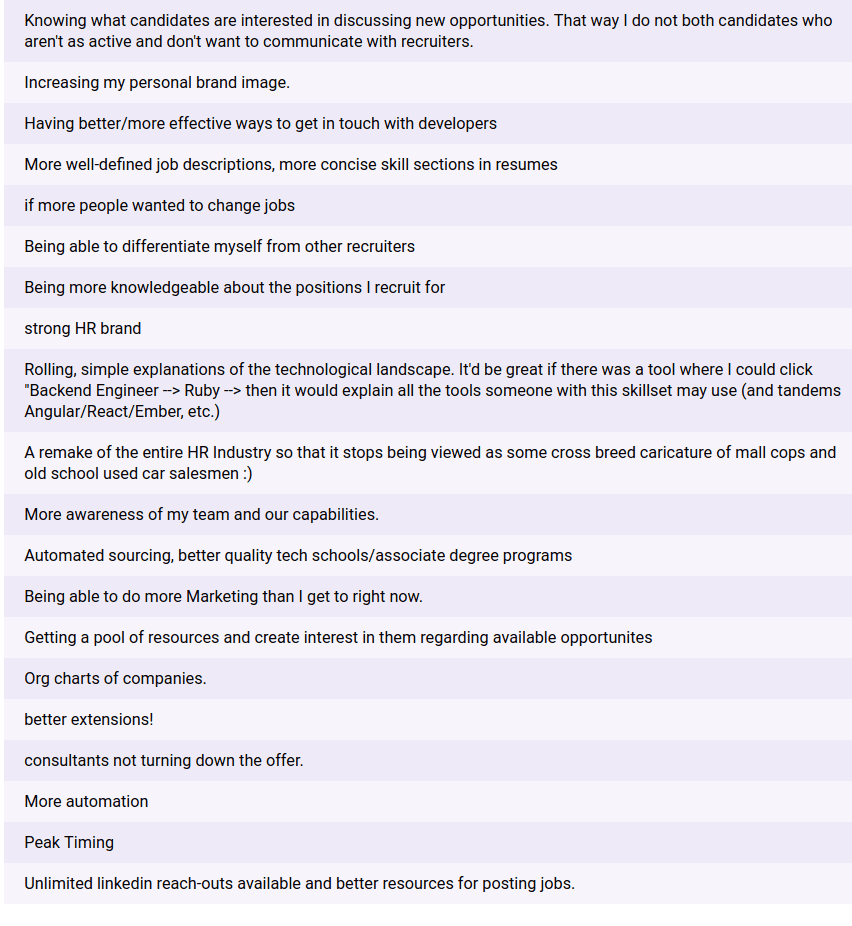 Summary: all over the map, but super interesting.

Again, I just want to know what problems I can solve directly for recruiters. Some of these are really fascinating and give me ideas for products to build.

How about this one:

Rolling, simple explanations of the technological landscape. It'd be great if there was a tool where I could click "Backend Engineer --> Ruby --> then it would explain all the tools someone with this skillset may use (and tandems Angular/React/Ember, etc.)

That is a cool idea and I want to build it right now! This could be a hugely useful thing I could build into the ITeach Recruiters site and help people a lot!

I learned a ton from doing this survey! I plan to do more, but even just asking more people the same questions would help so much. Would it be good to maybe to do a "current state of recruiting" survey every few months and track trends? Would it be good to just compile every month the #1 complaint from recruiters and see how it changes over the years? Let me know, comment or email me.

Doing these surveys gives me a ton of ideas, and I am so appreciative of everyone who helped me out and filled the survey out. This survey in particular really convinced me there was a need for a course specifically designed for recruiters, and I have to say reading these responses really makes me feel like I can solve a real problem people have.