Understanding The Tech Job Market Trends in May of 2020 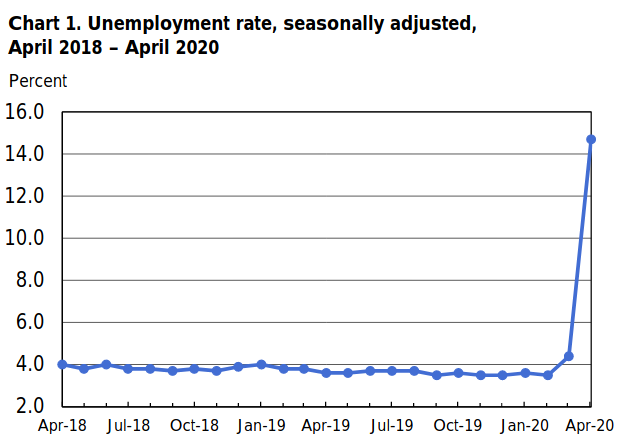 There is so much conflicting data coming out about jobs and hiring right now, I wanted to try to collect some of things in one place and take a hard look at the numbers that are actually available to us.

And that is the issue - things are changing fast and all of the official numbers are updated monthly at best... Everything is out of date and nobody knows what's temporary and what will be longer lasting.

Journalists seems to writing every article in breathless tones and it's hard to get any context.

BLS numbers from the May 8th report

I want to start off with the numbers from the Bureau of Labor Statistics May 8th report covering April (PDF Link). The headline number is a 14.7% unemployment rate. Astonishingly high. For reference, in April of 2019 we had a 3.6% unemployment rate.

However, it gets worse. We know from the weekly numbers that the number of unemployment claims is up to about 33 million now after 7 weeks of economic shutdowns in America. If you look at the BLS report it only shows job losses of about 20.5 million, so we know right off the bat the true number is actually higher.

If you read the fine print:

So in some sense we only got a snapshot about halfway through the month (the week of the 12th of April) and we're not able to see the true severity of the situation as it stands currently. I'll be writing another post like this in a month.

Because we want to focus on the tech sector (specifically software engineering and related positions) we need to dig down into the industry data.

But, its a little difficult to do this with BLS data, because while they do have an industry segment called "information", it doesn't seem to accurately represent what we are interested in.

As an aside, if you look the BLS page on "software developers" as an occupational title, they are estimating that there about 1.36 million software developers employed in the US. But I also wonder how accurate this number is because of the myriad of ways job titles are reported.

Let's check out "Information" in the BLS unemployment report: 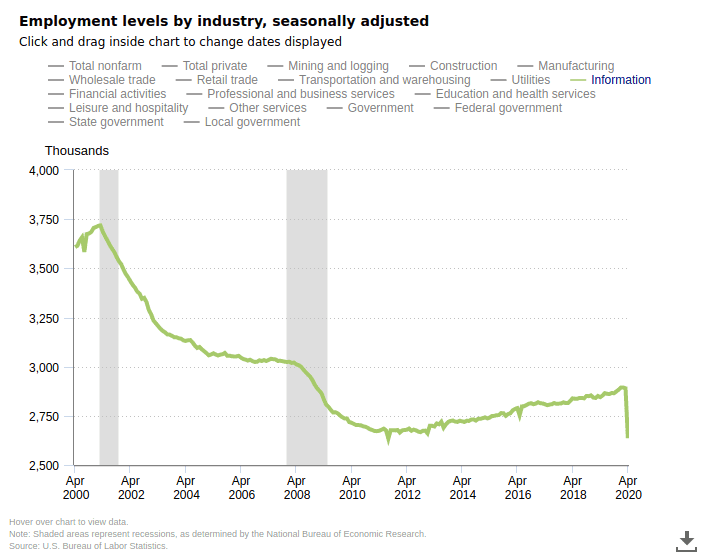 Hmmm, that doesn't look right. A profession that is growing rapidly doesn't have a graph that looks like that... But that does seem to line up with the dot-com bubble of the year 2000. This bucket might be anybody with an IT related job title, but I also somehow don't believe that we have many fewer programmers now than we did 20 years ago.

Let's try "Professional Services", that might be the right one. 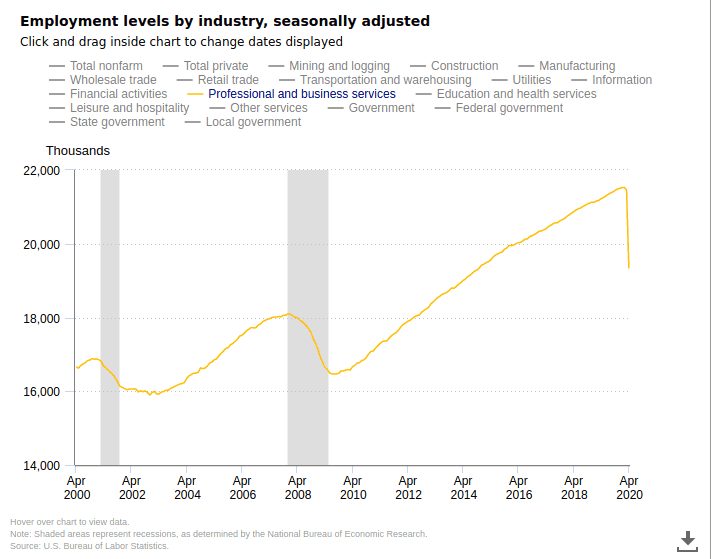 This graph looks more like I would expect it, but I just don't think this is narrow enough to represent a field with only one or two million members, and this data bucket seems to have about 20 million jobs in it which is way too broad.

For now, I think we will have to give up on the BLS unemployment stats to understand what is going on with the software engineering job market.

Since it's difficult to look at BLS data by occupational title, we might have to look at other things. We can at least list out some notable layoffs that have been reported.

A good place to look at startup layoffs is a site called Layoffs.fyi. I'll list some notable ones here:

They also made a searchable list of all recently laid-off startup employees. I swear they are not sponsoring this post or anything, I just wanted to link it because I think recruiters will find it useful.

If you look at the charts in the article they are showing single digit and low double digit increases in a lot postings with the word "engineer" in the title. "Front End Developer" has a big drop, and "Cyber Security Engineer" postings are way up, which makes sense considering priorities might have changed a bit now that some tools (such as Zoom) are being used a whole lot more and serious security issues are being found.

I think here we might be too early to really see real trends now. It makes sense there will be a lot of demand for some companies as people start trying to do everything online and adhere to social distancing. But unprofitable startups with high burn rates and business models that involve travel like Lyft, Airbnb and Uber are having to make unbelievably deep cuts.

Companies that are hiring in tech

I've still been seeing a lot of activity in my area (Minneapolis) among the healthcare companies, banks and certain retailers that are seeing a lot E-commerce success.

On twitter I've seen a lot high-profile engineers being hired by Shopify recently (they are now the largest public company in Canada). There are lot of E-commerce related tech companies experiencing huge booms right now. The future has been pulled forward for these companies.

Anecdotally speaking, friends I've spoken to working in tech at financial companies are very busy right now with all of the changes and new legislation going on. I would guess that as the government takes more economic actions this is going to continue.

Some recruiters I've spoken to say they are busy, others are really struggling right now. It's just a completely unevenly distributed situation.

If you look at the BLS data, you can't really tell exactly what is going on with tech (specifically software engineering, it's just too broad).

If you look at layoffs, so far among tech companies it's been somewhat limited to startups with business models that are impacted by Covid-19 related changes.

If you look at job posting stats, I think postings are down to flat but maybe we are just not seeing really pronounced trends yet. There is also a big difference between job postings and actual hiring. Again, it's hard to tell exactly if there are any clear trends going on.

Sadly, even if tech has been somewhat insulated so far, things look pretty bleak out there for the broader economy.

Best of luck out there everyone and stay safe. We're all in this together.