What Is A Good Response Rate? 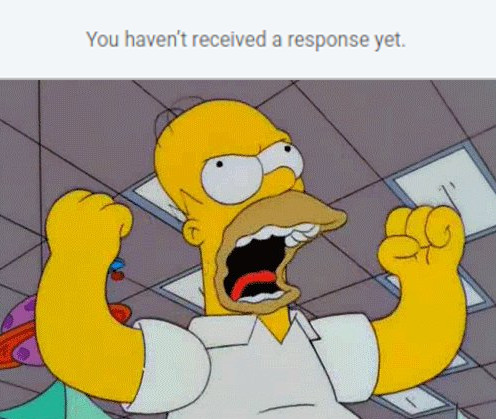 Post Author: Aaron Decker | Credit: the sad message you get on LinkedIn when somebody ignores you.
Date published: February 12, 2020

I did one survey where many recruiters reported they were seeing between 5% and 20% response rates. By the way, I only asked tech recruiters (my whole thesis behind this site is that tech recruiting is uniquely hard). For recruiters in general, the numbers generally seem to be a little bit higher.

According to a 2017 SourceCon survey respondents are reporting a response rate of around 35% on average.

Now, that is a 35% response rates for sourcers in general attending SourceCon. Again, this absolutely varies by position and industry. I would also guess that for less experienced recruiters and sourcers the numbers are lower.

I've talked to some very senior recruiters who recruit for very specific industries and they have told me they can get to a 70% or even 80% response rate. Jeremy De Costa wrote about getting an 85% response rate after tweaking one email campaign.

And it's more complicated than that - are people counting responses to a first email? Or are they counting a response to any email? Even after sending 5 emails, does that count?

So let's explore these numbers a little bit more.

How Many Developers are Actually Looking For a Job?

There are a lot of reasons an engineer would not want to respond to a pitch. Should response rates should go up if you are contacting somebody who has just updated their profile on a job board? Maybe... but maybe they are overwhelmed with messages and that will actually reduce response rates.

Anyway, according to the Stack Overflow 2019 developer survey 13.3% of those surveyed were actively looking for work.

If you add in the 54.7% of developers in general that said they are open to new opportunities, it looks like if you craft an enticing enough pitch then in total 68% of developers should potentially respond at any given moment.

How Many Developers Are Satisfied With Their Jobs?

This is another good way of looking at response rates. If people are unsatisfied, theoretically they should open to responding to a recruiter. Again, the source is the Stack Overflow 2019 developer survey.

Okay so jobs suck, we get it. That's why somebody is paying you to do it!

How to explain this gap?

So what is the gap here? If we assume that tech recruiters are getting a 25% response rate on average, but apparently 68% of candidates are either looking for jobs or "open to new opportunities" what can you do about this 43% gap?

Yes, there is research that indicates that time of day and other things are important... But let's apply Occam's Razor. The simplest explanation is probably the best:

It's not that engineers don't want to be pitched jobs. It's that the pitches suck!

The reason I say this is that from surveys I've done with engineers, it's quite clear that they get a lot of bad pitches. For example, 42.8% said the #1 reason they don't reply is mistargeted tech stack.