What's The Difference Between Junior And Senior Engineers? 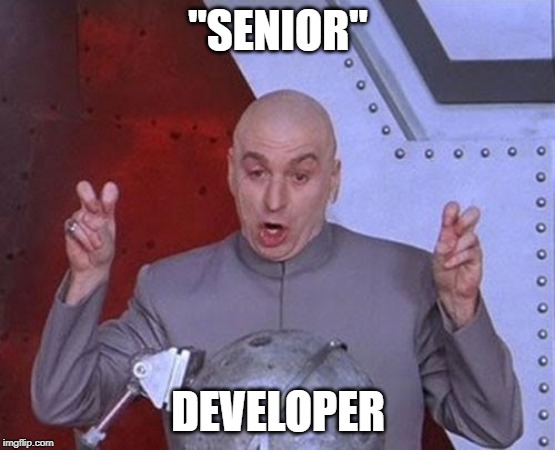 Lately I've heard a lot of developers joking about the term "Senior Engineer". On a recent episode of JavaScript Jabber Charles Max Wood said that he was first called a "Senior Engineer" after about a year and a half of professional work because his consulting company wanted to bill him at a higher rate!

So with that kind of title inflation going on it probably doesn't mean anything other than somebody is not completely green.

What Should "Senior" Mean?

To me, the term "Senior" should mean you are talking about a developer who is capable of building and shipping a small complete working piece of software by themselves.

I think the capability of a "Senior" level developer is relative to the size of the project you are talking about.

What does it mean to "Ship A Product" or "Ship A Feature"?

I'm talking about being able to design, code, launch, and support a piece of software. With a feature it means the same thing, but just as a part of a larger system.

In big companies you might be surprised to see how specialized people are. They might understand the design and components of only a small piece of an enormous system and have 5 years experience just doing that one thing.

In small companies it's very different. At my first professional software job I was responsible for basically building the entirety of a small product with advice and mentorship from my boss. So months into my first full time programming job I was in a sense "leading" development of a project in that I made a lot of decisions (and mistakes) but I was generally the only developer programming on it at that point. But I don't think I was a "senior" engineer by any means.

At the end of 2 years of doing this, I felt very confident that I could build software and make the decisions required to ship something that worked.

Then I went to a startup and worked on some very high scale applications doing support and learned a ton about support and reliability and high traffic situations and I realized how much other stuff there was to learn.

At that point I had 3 years of experience working on varied projects and I really was maybe "senior" in the sense that I could handle shipping serious code by myself. I had built software and seen the outcome of my decisions and learned from mistakes and assumptions over time, which is really the key experience I think that makes all of the difference.

What Should a "Junior" Developer Be Able To Do?

When starting off as a programmer you can look back every few months at old code you wrote and see amazing progress. The learning curve is so steep and there is so much knowledge you have to absorb and employ that the pace of progress can be unbelievable.

This goes on for years.

Given this learning curve, it's hard to pin down what a "Junior" developer is. My thinking is that a junior developer is somebody that can work on a small "feature" (one component of an application) with moderate guidance from more senior staff .

I think it depends. Let be realistic here: unfortunately it often takes a year or two to even get to the point where a developer can effectively work on application features that are part of a larger more complicated system without heavy guidance from a more senior developer. Most bootcamps are just plain not getting their graduates to this point in my opinion.

Most employers are looking for one of these types of hires:

Often times bootcamps are so short and the skills gap folks are graduating with is so large that a recent bootcamp grad will meet none of these requirements.

Employers generally want every developer they hire to hit the ground running and fill into one of these categories. They want developers that need minimal training and mentorship because they believe it makes senior members less productive.

I think there should be another level - "Apprentice Developer"

I think there should be a level below "Junior Developer" with a title more like "Apprentice Developer". This where a recent grad would work closely with a more senior developer for 6 months to a year in order to become an effective Junior level developer.

The apprentice would not be expected to write any code by themselves without heavy guidance and mentorship.

What about onboarding time?

On very complicated projects even "Senior" developers might take a long time ramp up. But the difference here is that the senior dev is ramping up on business requirements and unique implementation of the software, not the art of programming itself.

I'm not sure how long one is a "Junior Developer". Is it one year? Is it three years? It seems like it's getting shorter.

I think the definitions should be more about the capabilities of the engineer. Can they ship small features reliably? Can they ship large complex features? Can the ship entire applications?

Ultimately, these days the titles don't cary a lot of meaning. It's better to understand what the responsibilities of a role are and where they fit in context of the larger organization or project goals.