Rating Cold Emails As A Developer 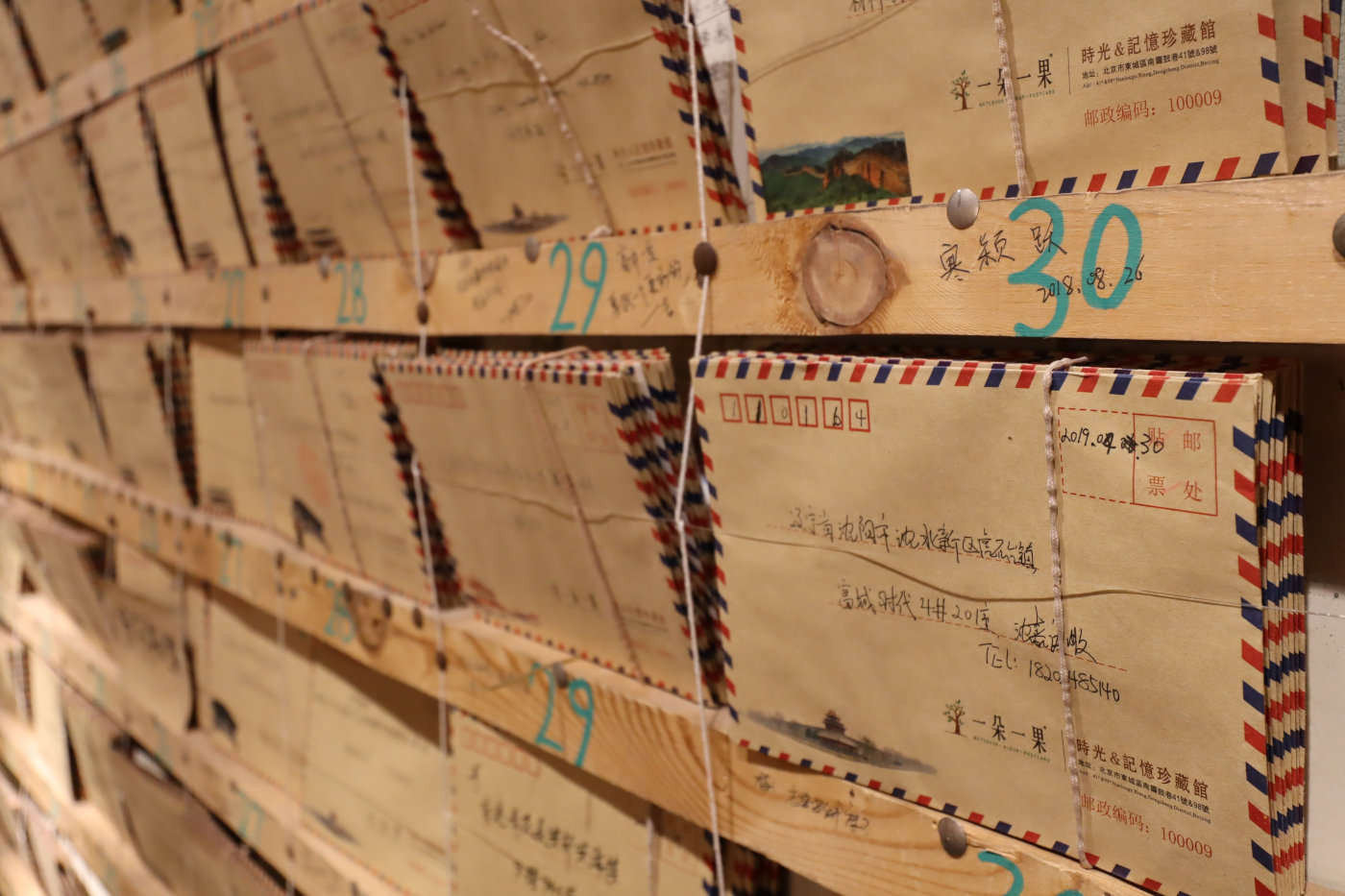 When I started building ITeach Recruiters I asked some of friends who are software engineers to start forwarding me cold emails they got from recruiters that really stood out either in a negative or positive light.

Personally, I think cold emails are really great. I would much rather get a cold email than a cold phone call, it is so much less intrusive. I don't even mind follow ups (when somebody emails four times in a row without a response) because I can easily choose to ignore them or I can finally get around to responding if it happens to come at a good time, and often I do.

So if you are a recruiter, this is all done with good humor and good intentions. I am censoring all names and references. I hope this feedback will be at the very least entertaining, if not interesting. And by the way, none of these emails were to me in case you are wondering. These were sent from friends who are software engineers of varying experience levels! So if you are reading this, and you happened to have been a recruiter who sent me an email in the past don't worry, it is not going to show up here.

A good example of a perfectly reasonable email 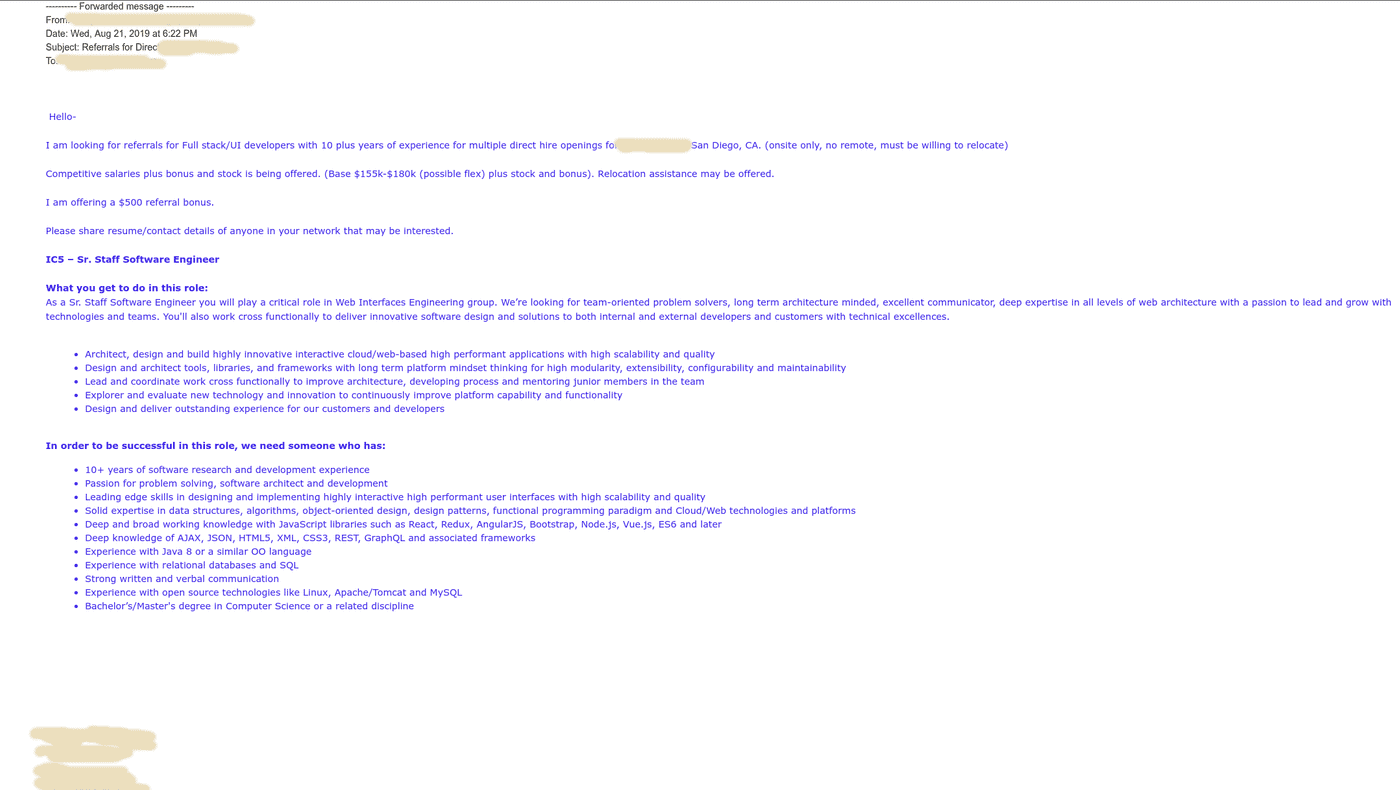 This email is fine, it checks all the boxes. They mentioned Location, Pay, Tech Stack, and type of role. Basically you either are interested or not. This is not a networking request and as far as I know for my friend it was somewhat well targeted (except for the Java part, I'm not sure he does that). However, the location is out of state and relocation is required. Anyway, this is perfectly OK. I would reply if it was targeted well and I was looking for a job here. Otherwise I would ignore it. 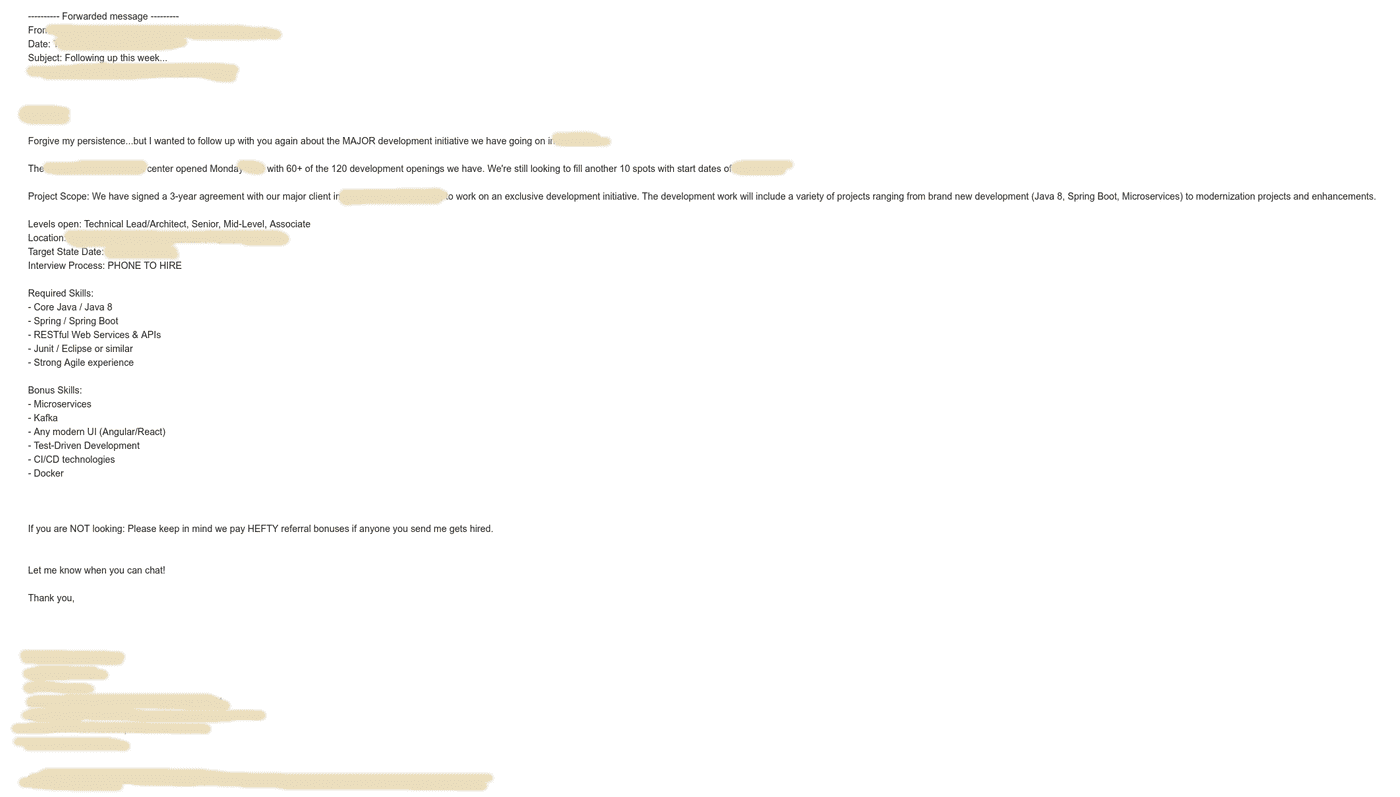 To me this really conveys a sense of urgency and makes me feel like cattle. Maybe that works on some people, it would not do much for me. I don't see pay included anywhere so my assumption is that is will be low and they just want a bunch of butts in seats. The whole vibe feels really impersonal. I would ignore this. 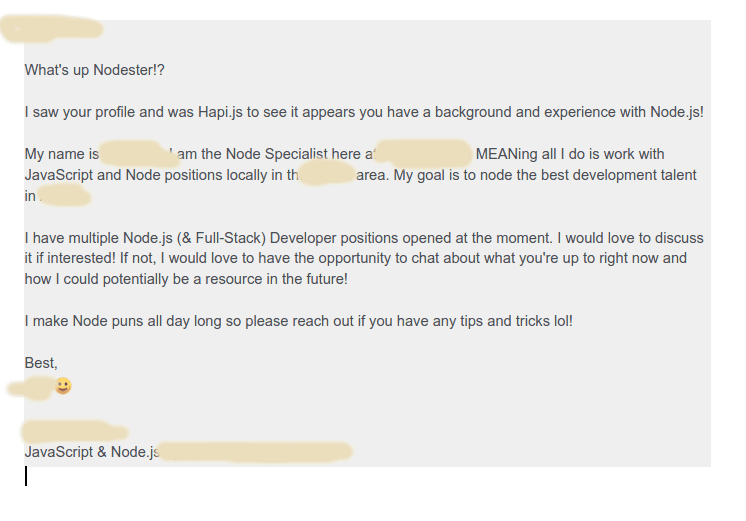 This one made me laugh a little bit and I appreciated the effort. Recruiters tell me how hard it is to stand out and this is one way of doing it for sure.

Personally I would respond, maybe if I was not even looking for work so I would say it is a good email. Basically a networking request, but in my case (and my friend's case) it was well targeted. I think some people would be turned off by this approach (hard to guess a person's sense of humor), but that is probably a risk worth taking! 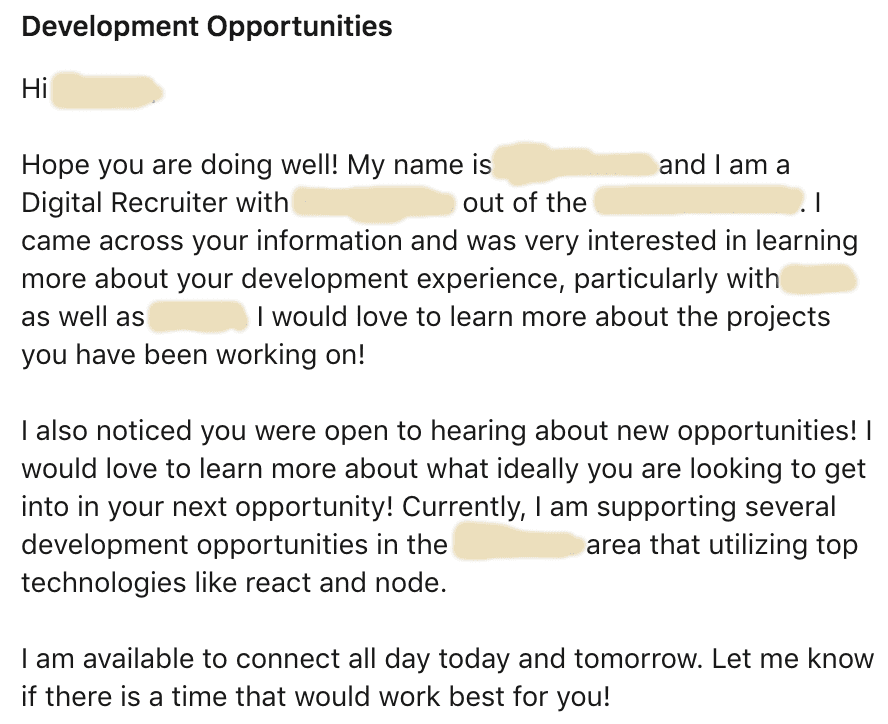 The email is almost comically vague. I would ignore this. Either have a specific job in mind with actual details, or make a real personal connection in your networking request. I think the targeting was OK because my friend who was sent this does React and Node, but eh... This is just meh.

Mistargeted and no information 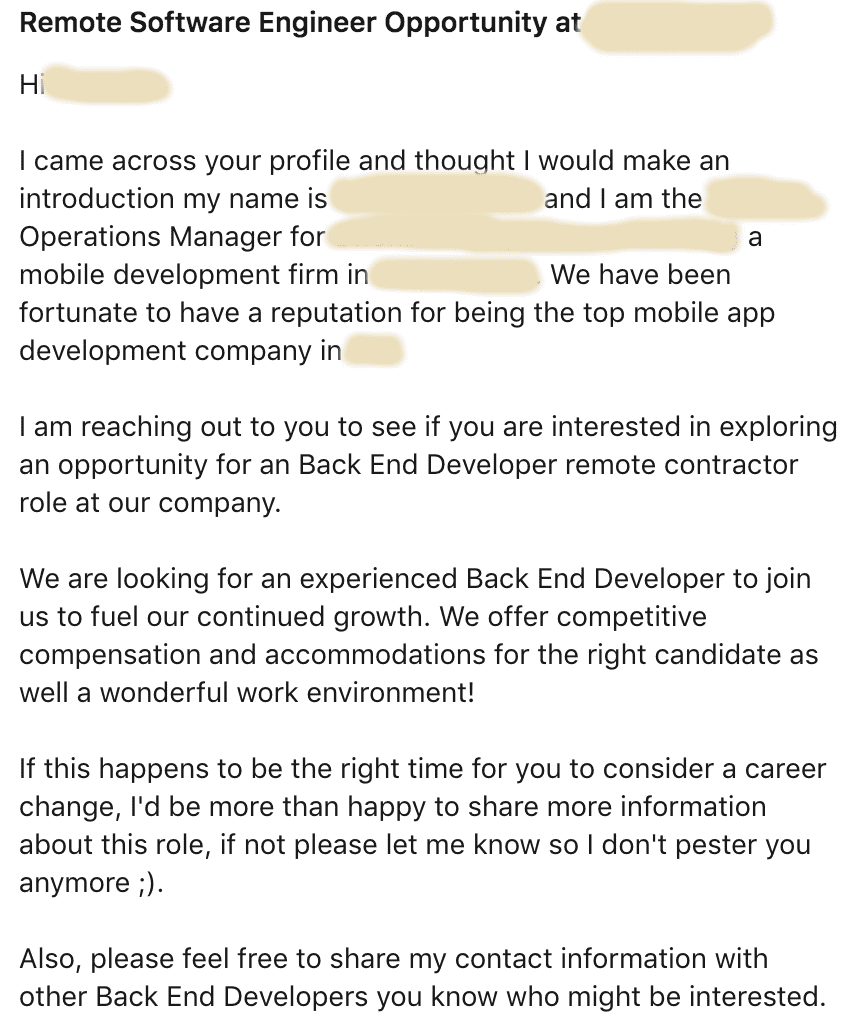 OK, yes, you can get away with a lot more because remote jobs are more in demand but this one was bad for a lot of reasons. First of all, the guy this was sent to is a front-end developer! Total mistargeting, this is a backend developer role! Also there zero information about pay, tech stack, the type of role, type of contract, ect. Nothing! I would ignore this one. 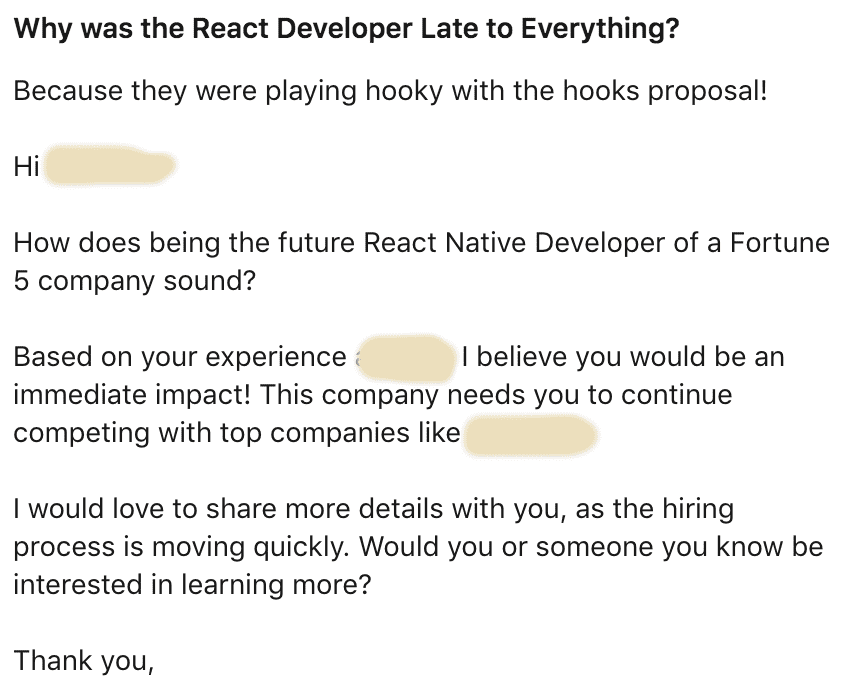 Okay the joke was bad but that is fine. I was little put off by it because hooks is not a proposal anymore, not for a while, hooks are out and I have used them. I am a programmer and my mind pays attention to technicalities like that, and yes my girlfriend hates that too, but what can I say? You have to know your customer.

The real crime here is that there is basically zero information aside from React Native. Not even a job location? I would probably ignore this one. Also "the hiring process is moving quickly", really? Come on I don't live under a rock! Maybe that is false scarcity, maybe it is not, but its a turn off to me.

The main complaints I hear from senior devs is that cold emails don't include enough information. Typically requested is Pay, Location, and Tech stack. Some people care about the company, but they are usually more concerned with the work environment. If you are missing this key information to me it comes off more as a networking request and in that case a more personal approach would probably be better.

I will have some more posts coming up going into detail about good ways to make personal connections with engineers, but for now I just wanted to add that I think making requests for general networking without specific details is fine and building relationships is definitely a good idea. Engineers are open to that. Some of these are just examples of that not landing very well.

If you want me to rate your cold email I would be super excited to do that! Just shoot it over and put "rate my email" in the subject line so I know what it is about (aaron@ard.ninja).

I have a couple more posts like this planned so stay tuned.